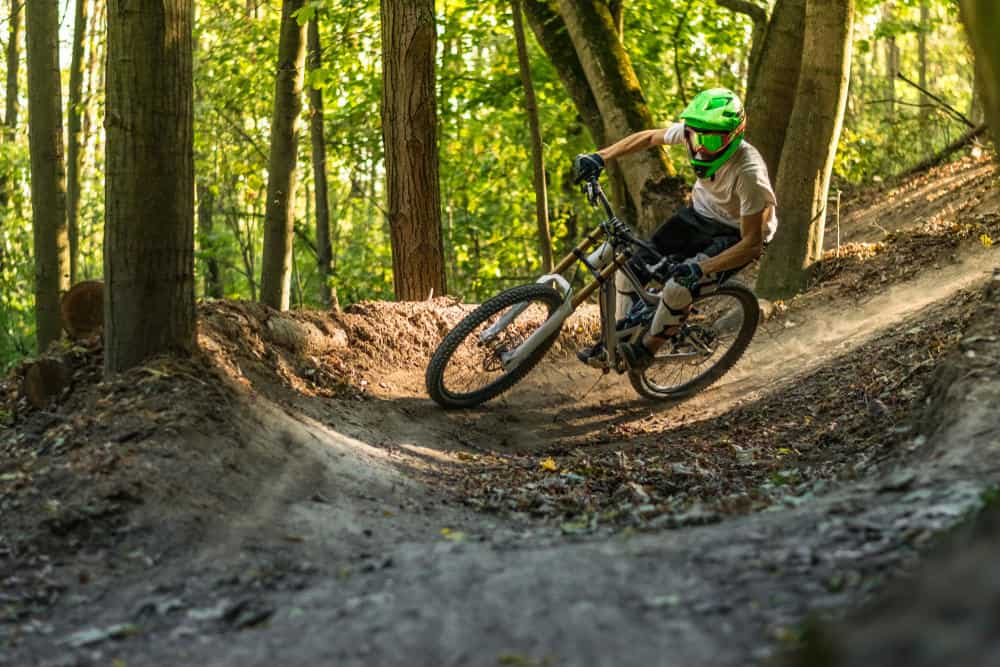 Last week I had the good fortune to spend 5 days in Whistler, BC.  Our main reason for going was to ride the famed Whistler mountain bike park.

Actually, not so much for me as much as for my 8-year old son.  That said, I had a blast too.

Before planning this trip I had talked to a few dads I know who took their kids to the bike park asking whether 8-year old kids could handle the trails.

All of them said something to the effect “oh yeah, there are great beginner trails that young kids could handle.”

That was good enough for me.

I called Whistler and bought tickets for 3 days.  While on the phone with Whistler, I asked what was the youngest age kids go enter the park.

I was told kids had to be at least 5 years old, but she said it’s probably too difficult for most 5-year olds.  She agreed the park’s easier runs were great for 8-year-old kids.

And so I bought the tickets, rented an Airbnb house in Kadenwood (awesome Whistler neighborhood BTW) and committed to our first foray into the Whistler bike park.

I was told by one dad that a great starting run in the bike park is EZ Does It.

What is the Whistler bike park? 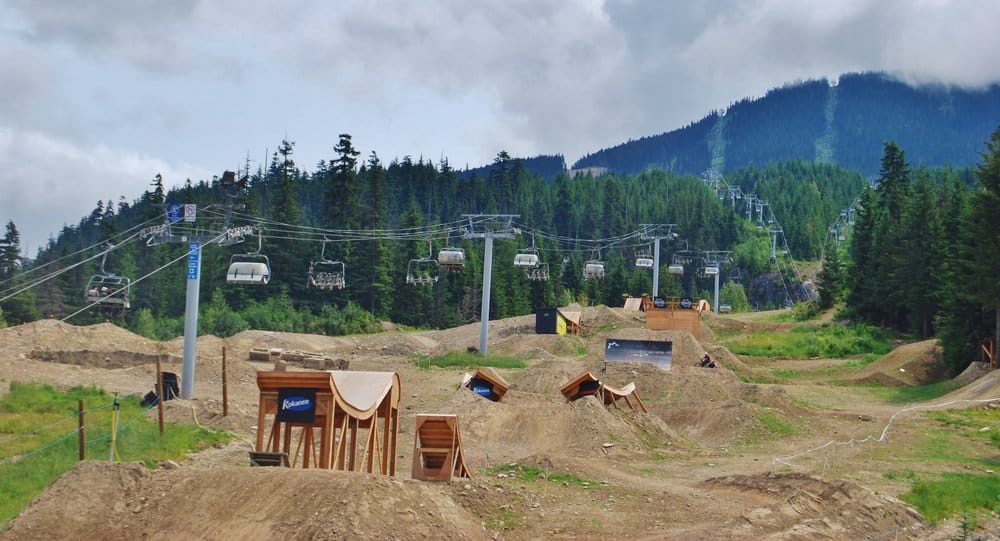 We didn’t ride this, but it sure looks awesome.

It’s a huge part of the Whistler ski area that’s converted to a fun bike park with all kinds of mountain biking trails. Some are easy, some moderately difficult and some are insane.

See also  What Happens if a Bike is Left Out in the Rain for a Long Time?

Whistler.com reports that it’s made up of 70 bike trails that span 80 kilometers and 4,900 vertical feet. There are four zones.

Why pay for a bike park when trails are free? 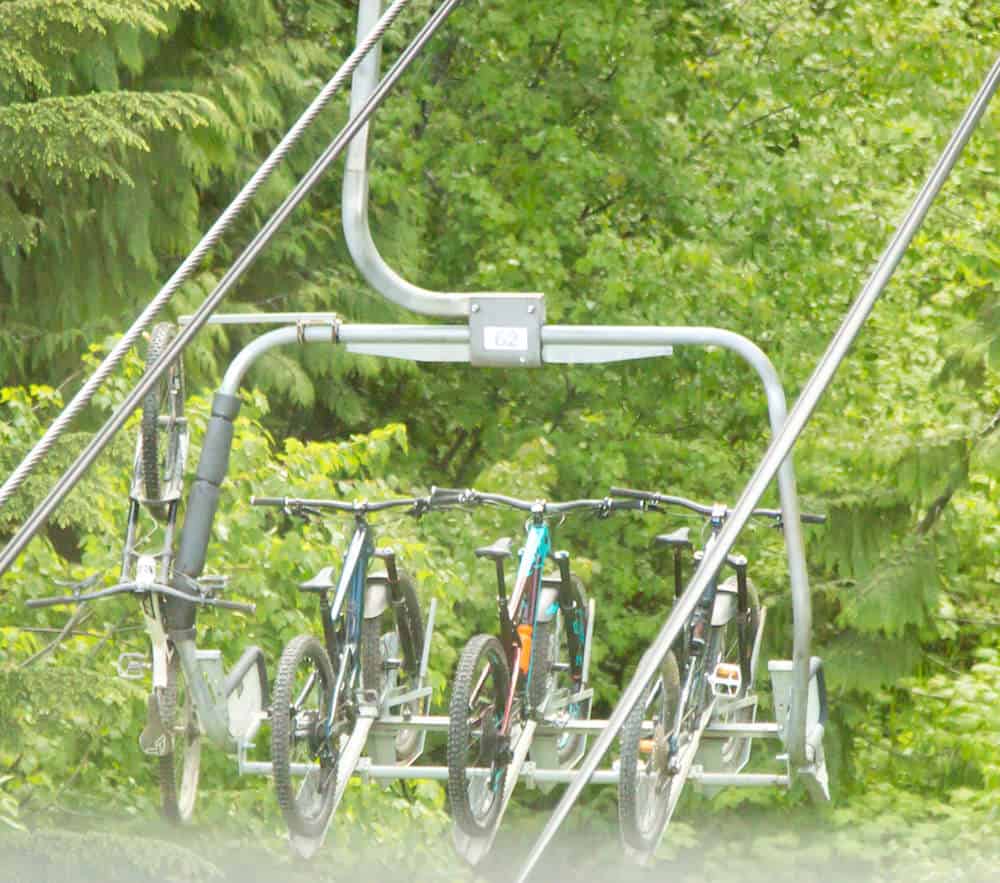 It’s not cheap.  Our tickets cost nearly $400 for the both of us for 3 days.  Why would you pay to ride bikes when you can do it for free pretty much anywhere?

Two words it’s worth the trip and cost: No uphill cycling.  It’s all downhill.

Whistler converts a chair lift to accommodate bikes.  How it works is every other chair carries bikes.  You sit on the chair behind the chair with your bike.

The size of the park is way bigger than I expected.  There are trails for all skill levels.  If you like air, there are some insane jumps and drops.

If you prefer a nice gentle ride with flowy turns, there are a few terrific green runs (which is what we stuck to).

When you get off the chair lift, the attendants have your bikes ready for you.  You jump on them, ride down the ramp and choose your trail.

What’s the easiest run?  Which one should young kids start with?

We were told to start with EZ Does It, so that’s what we did.  I didn’t relish ending up on some trail my son couldn’t navigate.

EZ Does It was indeed easy but still fun.  In fact, we pretty much stuck to that run for all runs.

We’ve ridden far more difficult trails up behind our house… so I’m sure my son and I could have handled blue runs.  We’ll do those next time (and yes, we’ll be going again).

See also  What are Hand Protection Options for Mountain Biking?

Here are some photos I took of the EZ Does It trail: 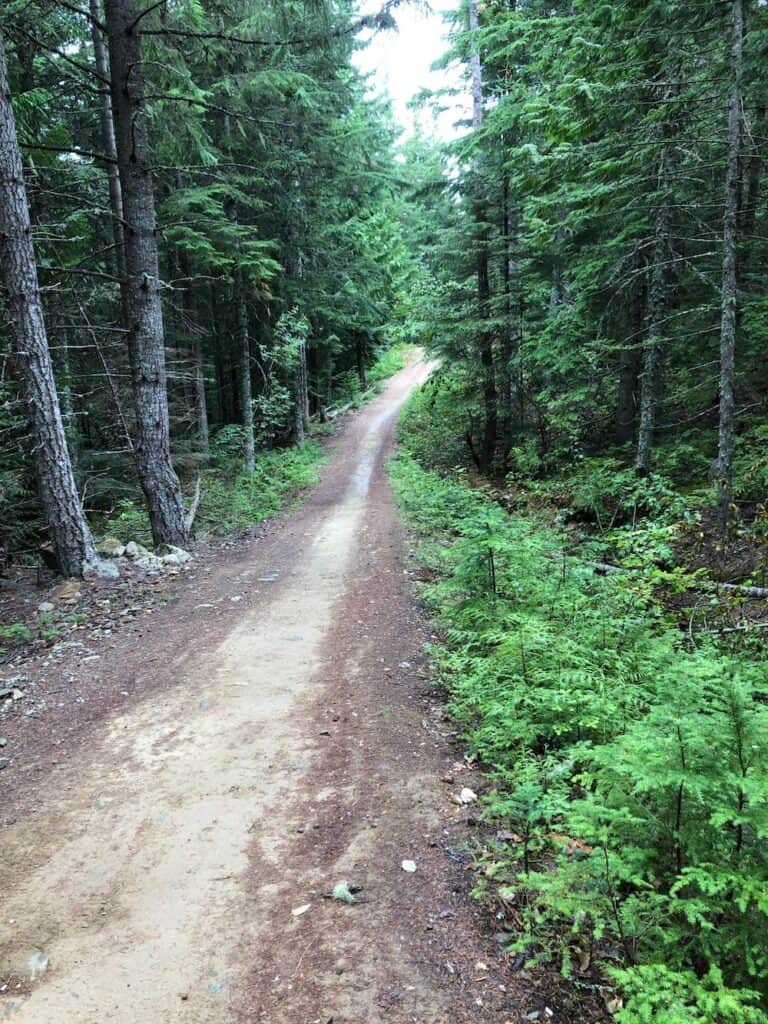 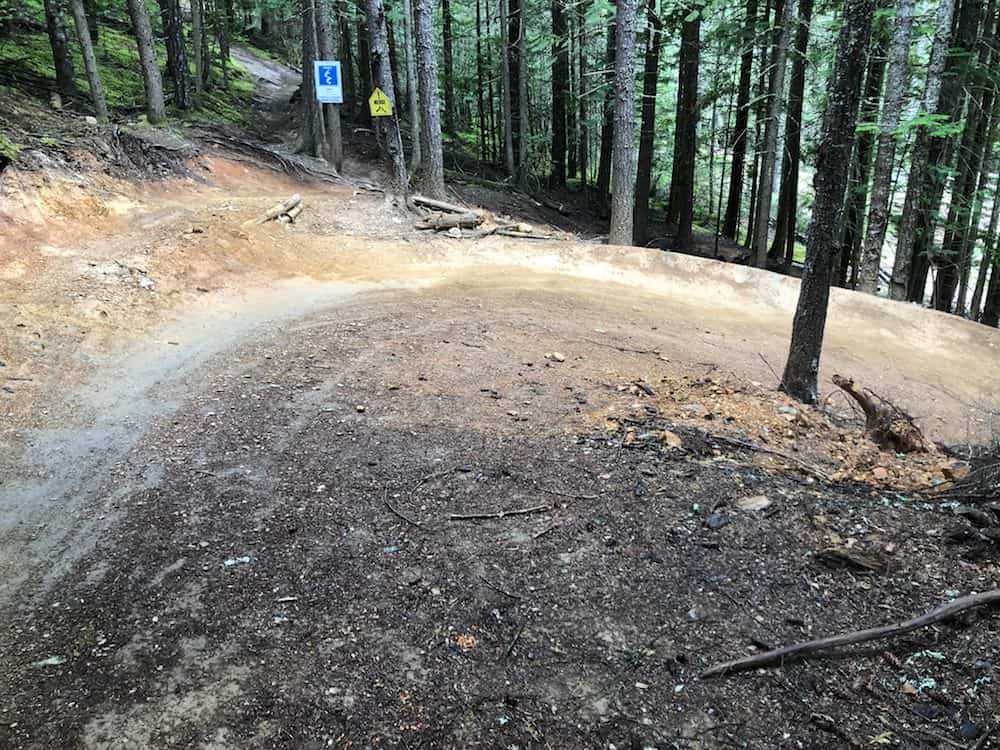 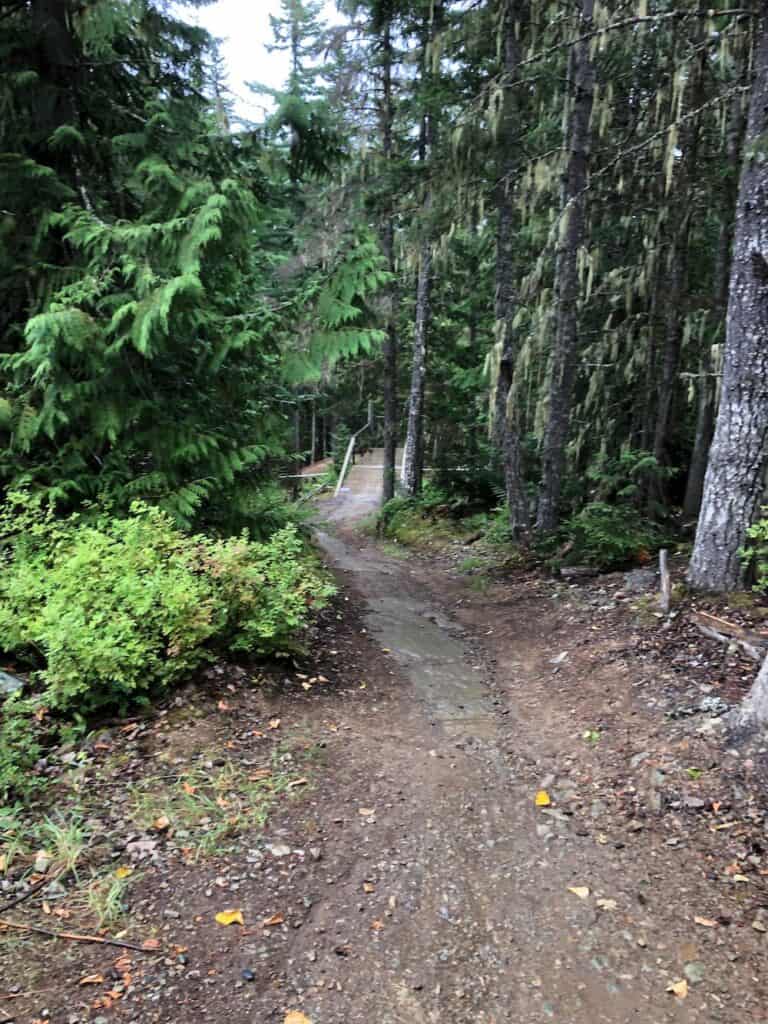 How long does it take to go down a run?

We timed our runs.  It took us 20 to 25 minutes to get down.  Keep in mind we weren’t flying but kept a decent clip.  We also stopped a few times where we could pull out.  Fast downhill trail riding tires arms and hands.

While I didn’t rip down any blue or black runs, I suspect you finish those runs in less time.

Are there any areas you have to bike uphill?

On the easy runs, we took there were a couple of slight inclines we had to pedal up.  Other than that it was all downhill.  It’s awesome.

Are the line-ups for the chair long?

If you can, go during the week.  Weekends at Whistler are crazy busy.  The same applies for skiing. Next winter, we’re planning a Sunday through Friday ski trip there so we don’t spend so much time in gondola/chair lines.

On Thursday, which was raining on and off we didn’t wait at all.  We just walked onto the chairs which was great.  The downside is we were pretty wet by the end of the day.

On Saturday, which was a sunny day, the line up was pretty long.  It took about 20 minutes which wasn’t too bad.

How many runs can you do in a day?

We did 3 runs each day which was pretty good.  We could have done several more, but my son loves the Whistler pump tracks (which are free) so we spent time at those as well.

We also had leisurely lunches in the village (steps from the bike park).

Does the bike park extend to Creekside?

I believe it does and while our house was in the Creekside area, we didn’t try to take a trail to the Creekside portion of the bike park.

However, if in Creekside, there is a bike park chair lift there to ride.

There’s a little more info about the Creekside bike park here and here.

Can you use an electric mountain bike in the bike park?

Yes, you can.  I didn’t take mine and instead rented a downhill mountain bike for the 3 days to give it a try.  It’s a lot lighter.

My eMTB would have performed just fine for the easy trails we did.

Can you rent bikes and gear close to the bike park?

Yes, you can. I did. I rented at Premium Bike Rentals in the Whistler village which is right next to the bike park.  The folks at Premium were awesome.  I had reserved a bike along with a full-face helmet and armor before our trip.  Everything was ready when I returned.

Note, that if you rent a bike for multiple days you have to return it to Premium at the end of the day. I couldn’t take it to our rented house.

They are not required but HIGHLY recommended.  I required my son to wear one.  I didn’t (even though I rented one) because we stayed on easy runs.  If I were doing blue or black, I’d definitely wear a full-face helmet.

Not required, but highly recommended if you’re doing blue or black runs.  I wore armor the first day but once I realized the trails we’d be going down weren’t all that difficult, I didn’t bother on day 2.

My son wore knee pads and gloves (in addition to a full-face helmet).

Does the Whistler bike park ever sell out?

I asked the person who sold me the tickets this and she said it’s rare, but there is a maximum number of tickets available.  Accordingly, I suggest buying your tickets as soon as you know the dates of your trip.

Where’s the best place to stay if riding in the bike park?

I’ve spent many nights in hotels and now an Airbnb house in Whistler so I’m very familiar with accommodations.

During our most recent visit, we stayed 5 days in a beautiful house in the Kadenwood neighborhood in Creekside.  We opted for a house for the private pool and hot tub.  However, we had to drive to the bike park.

My favorite hotel in Whistler during summer is the Four Seasons.  My favorite for skiing is the Fairmont just because it’s right next to the gondola.  If at the Four Seasons, you have to take a shuttle to the slopes, which sucks.  Other than that, the Four Seasons is an absolutely stunning hotel with an incredible outdoor pool and hot tub area.  The Fairmont is a close second.

If you prefer to stay in the village, the Hilton is a good choice.  Friends have stayed in the Westin and liked it.

See also  Are Rear Shocks on a Mountain Bike Worth it for Kids?

Next winter we’ll probably give staying at First Tracks Lodge in Creekside a try.  It’s less busy, offers all you need in the Creekside village area and it’s much less expensive for more space (2 bedroom condos are $600/night which is 1/3 of what Fairmont charges for a one-bedroom suite during ski season).

Overall: Is the Whistler bike part worth it?  Good for kids?

Yes, this bike park is totally worth the trip and it’s perfect for kids as long as they can ride reasonably well.  I don’t think my 5-year old son would like it much, but my 8-year old couldn’t get enough.

The easier trails (green trails) were not steep.  There were no drops, rocks, roots or jumps.  The banked turns were easy enough for kids to navigate (and sure are fun).

We did two full days in the bike park (took one day off due to torrential rain) and my 8-year old didn’t crash once.  Neither did I.

You bet we will.  I suspect when my youngest son can do the park, we’ll spend weeks in Whistler each summer riding in the park daily.  It’s amazing.