At some point, whether you ride regularly or have kids getting into biking, you need to get a bike rack for your vehicle unless you have a pickup truck with a Dakine mat so you can sling your bikes’ front wheels over the rear gate.

When our kids’ bikes were small, I just chucked them in the hatch until our oldest got a mountain bike.  That meant I needed a bike too.  And that’s when I discovered electric bikes.  I gave one a test-ride and knew that was the bike for me.

Thing is, electric mountain bikes weigh a ton (50 plus pounds).

I didn’t know it at the time but that would mean I’d need a heavy-duty “tray-style” bike rack.

Since mountain biking is hugely popular in our neck of the woods, there was no shortage of people to ask about which bike rack I should get.

Most told me a Thule tray rack with two-bike extension is the best given the bike load I’d be hauling around.

Not one to ignore sound advice, that’s what I bought.  It’s the Thule T2 Pro XT bike rack to be exact.

I’ve had this rack for one year now.  We’ve hauled bikes on it at least 30 times. Probably more.  It’s still going strong.

Here is my detailed review.

Contents show
What does it look like without any bikes?
Hitch required
How secure are the bikes?
Front-wheel lever arm
The rear wheel strap
Ease-of-use (loading and unloading)
Bike and Wheel Size
Tilts for hatch access
Minimum bike size
Assembly
Cost
Is the 2 bike add-on extension worth it?
FAQ
Overall

I’ll say this and that is the 4-bike version really stands out.  It’s quite the rack when folded up. Check it out: 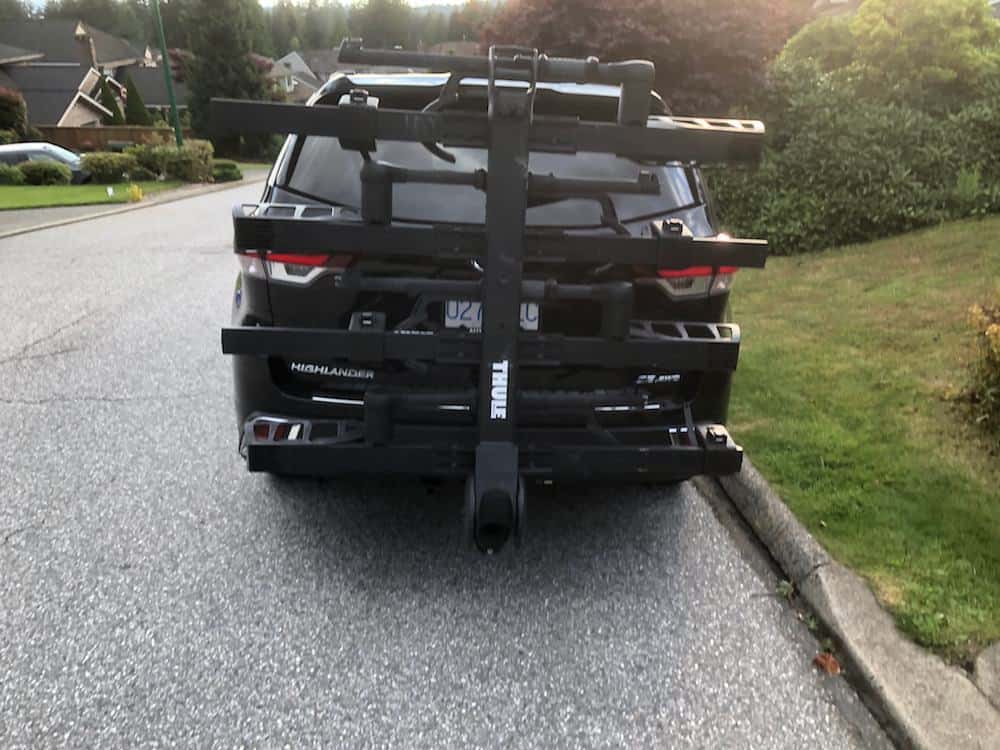 When driving with this rack on in reverse, either folded up or down, don’t rely on the rear camera because it sticks out beyond the warning sensors.  We have to be very careful when backing up. 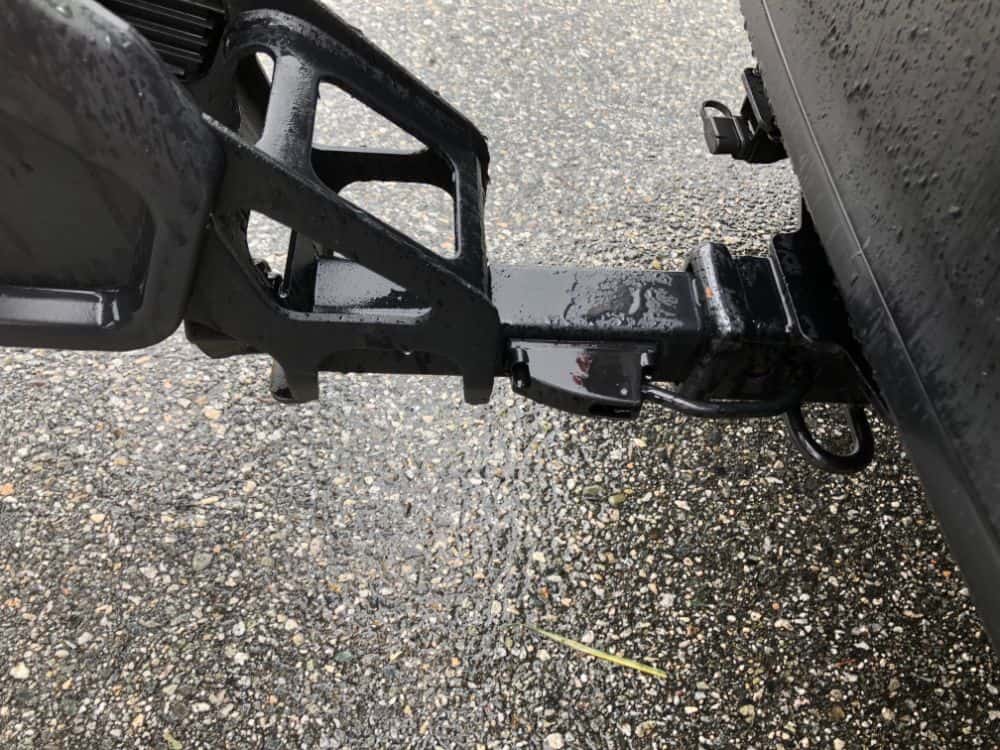 The Thule T2 Pro XT is not your strap-on the rear hatch or trunk bike rack.  It’s a heavy-duty rack that requires a hitch.  The rack itself weighs well over 100 pounds.  That’s without bikes.  The two-bike version can haul bikes weighing up to 120 pounds.

How secure are the bikes?

As long as you remember to secure both bicycle wheels, the bike fits properly and you’ve properly assembled the rack and attached it securely to the hitch, your bikes are secure.

When I first got it I’d watch nervously in my rear-view mirror to ensure the bikes weren’t jostling too much.  The last thing I wanted was to have four bikes fly off the back and slam into other cars on the road.  I don’t much care about the bikes but really don’t want to injure anyone because I needed to haul some bikes on vacation.  The fact is the bikes are secured down very well and hardly jostle at all.

I’ve never had a single mishap such as a bicycle dangling or any potential for trouble.

The front bicycle front wheels sit in a wheel well attached to the rack.  A lever arm clamps down on the top of the wheel close to the fork. 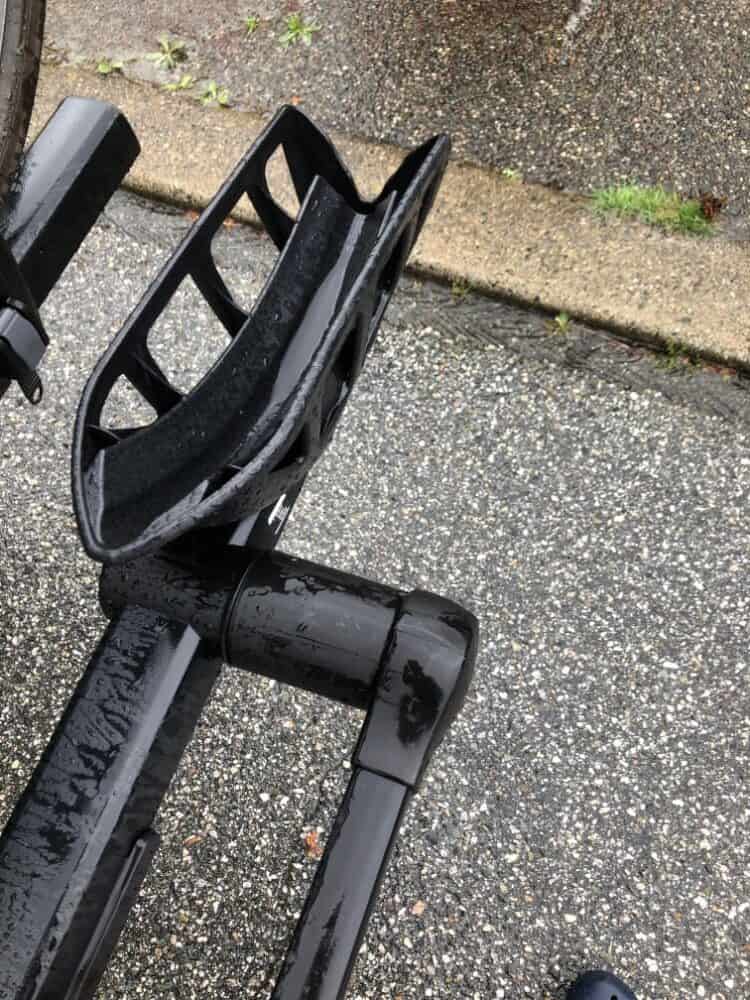 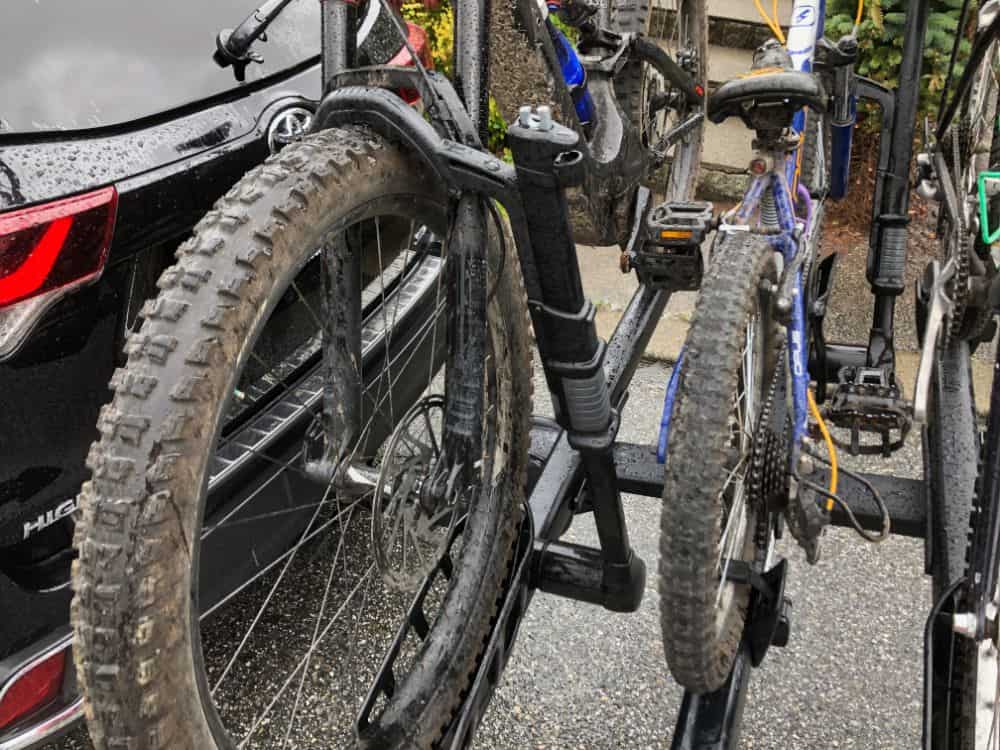 The rear wheel of the bikes is secured with a tension strap.  Check it out:

See also  Do You Need Gloves for Mountain Biking? 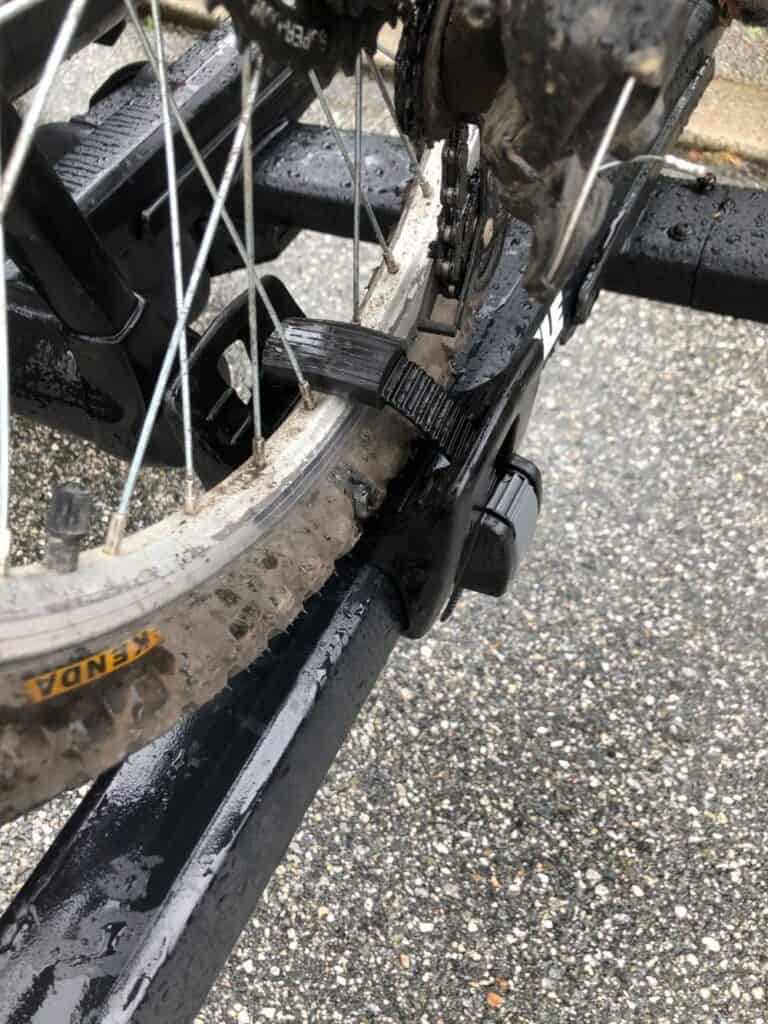 Even an 8-year-old can load a bike. I’m not kidding. My eight-year-old son loads his own bike.  It’s that easy (although he strains a bit).

My 50+ pound e-bike is another matter.  It’s a beast to lift up but once I slap on the front-wheel lever, it’s stable so I can secure the rear wheel strap.

It takes me less than a minute per bike to load and about the same time to unload.

The trick is to secure the bike with the front wheel lever first so that you don’t have to hold the bike up, then you can strap in the rear wheel.

This rack accommodates bike wheels 20″ to 29″.  That’s pretty much most bikes.  It also accommodates fat tires up to 5″.  In other words, you can haul road bikes, mountain bikes, kids bikes (20″ wheels and bigger), electric bikes, and more. 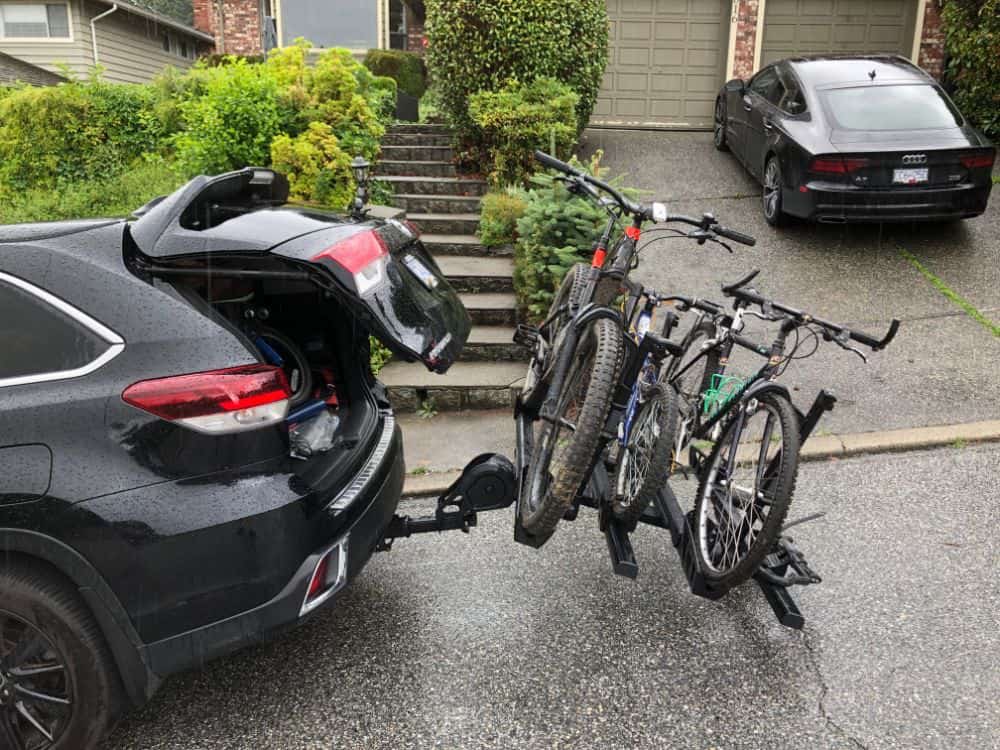 If you have a hatch vehicle like us, sometimes en route you need to access the hatch.  It’s a good thing Thule thought about this because this rack can tilt downward so that the vehicle’s hatch door can swing open.

This feature comes in handy all the time as we inevitably need to grab something out of the back and we sure don’t want to unload the bikes to do so.

Technically, the minimum wheel size is 20″.  However, I have put my younger son’s 14″ wheel bike on it.  Normally I put his bike in the vehicle but when going camping or a road trip there isn’t always room in the vehicle.  We’ve had no problems but as with all things, follow the manufacturer’s guidelines.

My only complaint about this rack is that it was not easy to assemble. It took me about 2 hours.  Admittedly I’m not the handiest person when it comes to these things.

I found the instructions a little vague, especially when getting the rack to lock properly into the hitch which is probably the most important step in the assembly process.  If it’s not secure in the hitch, it’s a hazard.  Eventually, I got it locked in and snug in the hitch.  From there it wasn’t all that difficult.

Note, that 2 hours included attaching the 2-bike extension so that it can haul 4 bikes.

However, I needed a heavy-duty tray rack that could hold bikes weighing up to 50+ pounds so I had no choice.

Is the 2 bike add-on extension worth it? 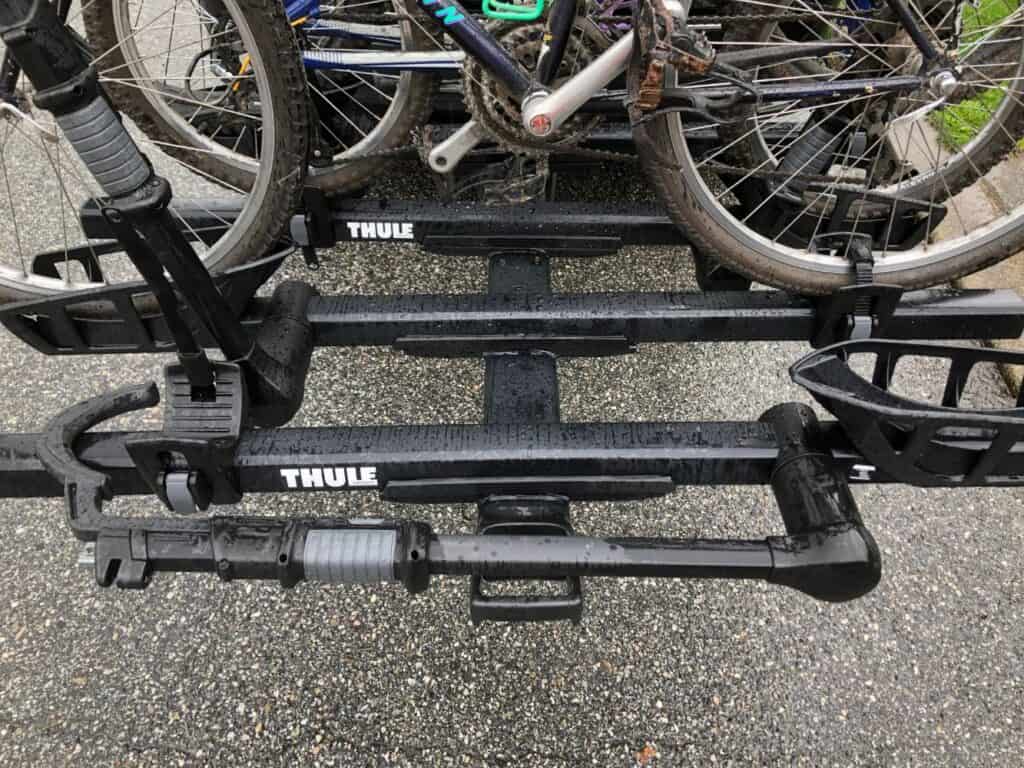 Yes, it’s 100% worth it if you need to haul 4 bikes. I’m surprised I don’t see more given that I’m constantly hauling my bike and kids’ bikes.

You can get the 2-bike add-on extension here.

How much weight can the Thule T2 Pro XT bike rack hold?

The 2-bike rack alone can haul two bikes weighing up to 120 pounds in total.

How much can a single bike weigh up to?

The heaviest a bike can be is 60 pounds which pretty much covers most bikes, even electric bikes.  I have a huge electric mountain bike and it comes in under 60 pounds.

See also  Types of Bicycle Brakes - More than You Think

Sadly, no it doesn’t.  Pull out your toolbox and be prepared for a difficult assembly job unless you’re good at that stuff.

Is it easy to take off of the vehicle for storing?

No.  Since installing it I’ve not removed it from the vehicle.  It’s heavy and difficult to remove from the hitch.  It’s not built to be removed after each use unless you love heavy work regularly.

Can you put bikes with training wheels on it?

Yes,  you can but you’ll need to space it away from the next bike.  If you have a bike with training wheels, you can only get three bikes on the rack.  I know because it was only last year that our youngest son had training wheels.

Is there a way to lock the rack to the car and hence lock the bicycles?

Yes, the rack locks to the hitch that can only be removed with a key.  You can then lock the bikes to the rack with any lock you have.

Does it double as a ski rack?

Unfortunately, this rack does not double as a ski rack.  I’m sure with some bungee cords you could strap on skis but it’s not designed to carry skis.

Is it hard to lower and raise?

It is heavy without bikes.  You don’t want to drop it down.  It’s a bit of a pain to constantly have to lower it and raise it when accessing the rear of the vehicle… but that’s a small price for recreation, right?

See also  Will an Electric Bike Propel You Forward Without Pedaling?

I love, love, love this bike rack.  It was costly but it securely hauls up to four bikes.  It’s easy to use and IMO it actually looks pretty good.