Ever wonder how fast do professional downhill bike racers go? In this article we will discuss what's the average speed of a biker and how fast they can go. 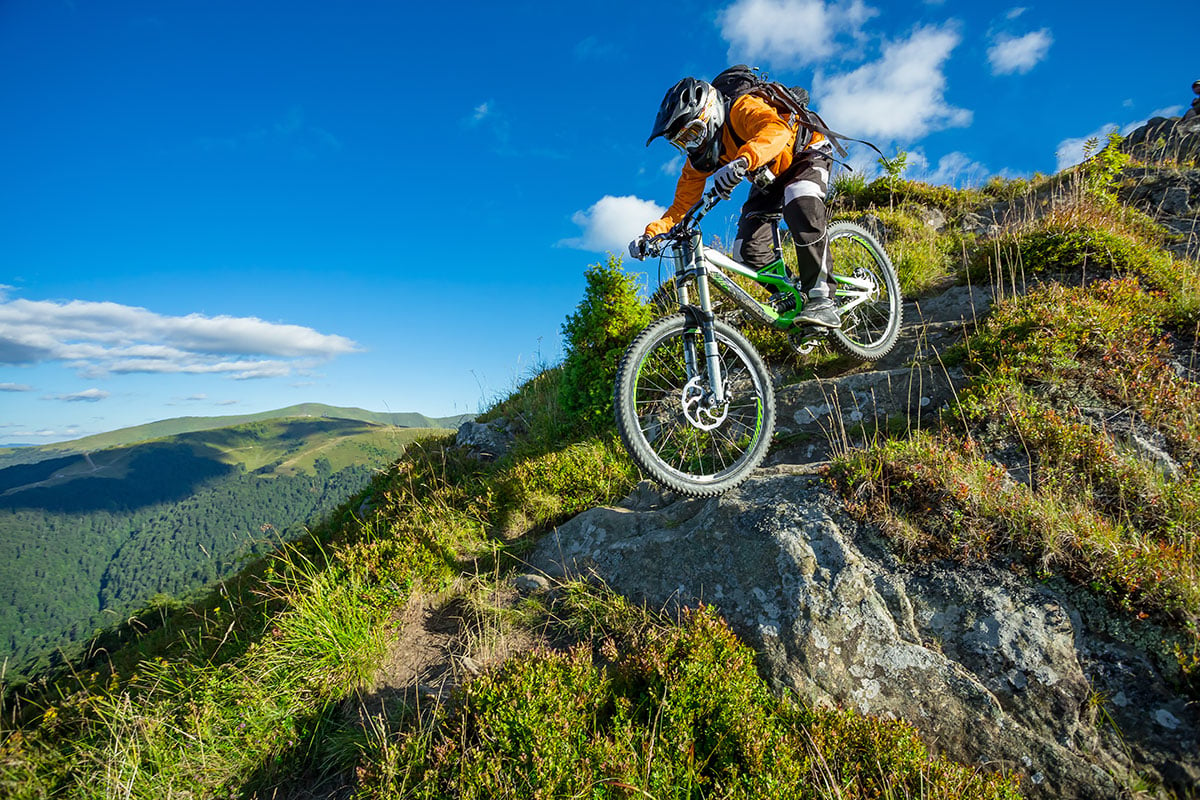 Real mountain bikers know: there’s nothing more fun than absolutely ripping down a hill at blistering speeds. Whether it’s a single track trail with rocks, roots, twists and obstacles, or an open fire road that shoots straight off of a mountain at a steep grade, there’s nothing more exhilarating.

Professional downhill racers like Gee and Rachel Atherton, Rachel Hannah, and Steve Peat make their living doing just this, and we all envy them.

But just how fast can they do it? What’s the top speed ever clocked at a downhill racing competition? How much training does it take to do what they do, and how can you learn how to descend hills on a bike just like they do? Read on to find out! 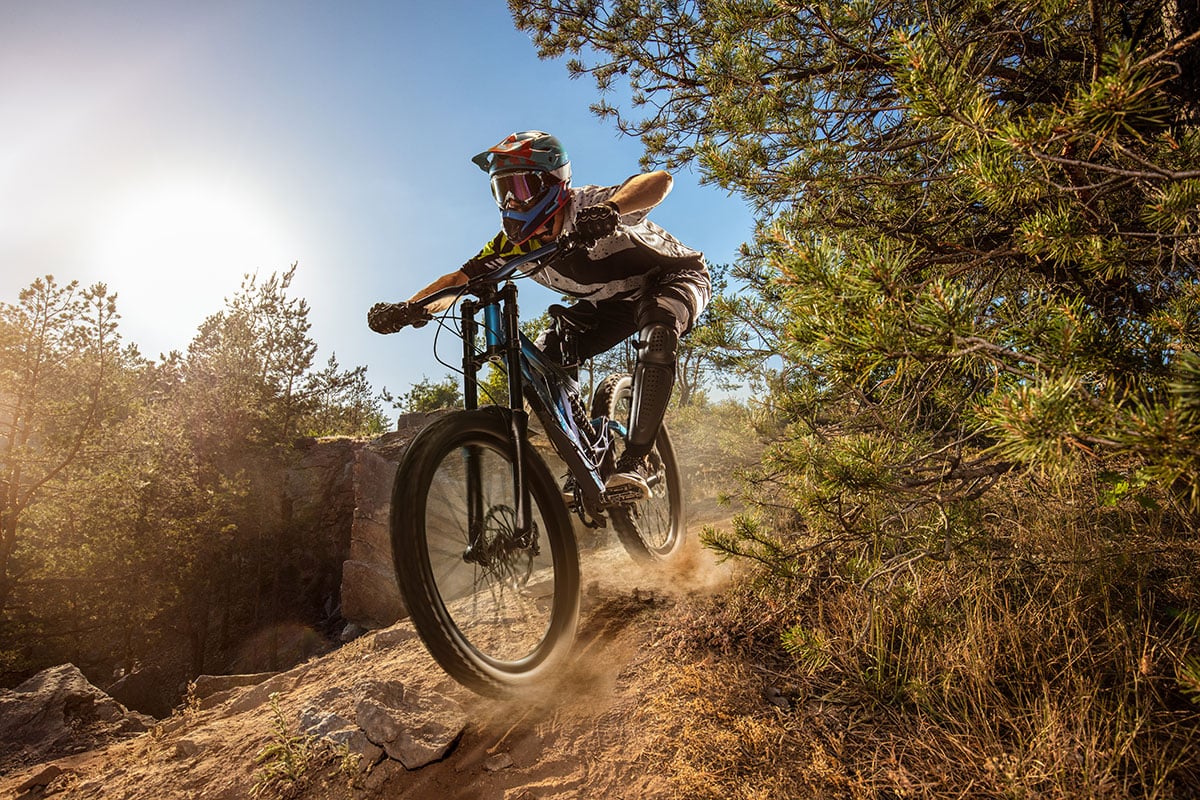 Competitive downhill riders, according to the two studies here, average a speed of roughly 17 to 20 miles per hour during races. As cyclists, 20 miles an hour feels fast to us, but not blistering fast—on an open road, it’s not so hard to get to that speed.

This figure might not be as impressively fast as you might think, but let’s keep in mind that it’s an average—the riders are going significantly faster than this for a good portion of the race. And this figure comes from a track with bends, rocks, logs, roots, and other obstacles, which take some time to avoid, and as any downhill mountain biker that’s been at it for a while can tell you, can sometimes make your life harder when they suddenly sweep you off your bike!

The same two studies from before claim that competitive downhill riders reach top speeds of 27 and 32 miles per hour respectively when competing. This case is where you’ll find the really impressive numbers—Imagine the reflexes you’d need to make the quick dodging adjustments that trail riders do, but at 30 miles per hour!

Competitive downhill cyclist Eric Barone, riding on snow with a special prototype bike, was once measured to be moving at 141 miles per hour. I don’t know about you, but I’ve never even driven my car that fast. Of course, the conditions were very different than a single-track trail with obstacles, but this is worth mentioning because of the sheer insanity of the 141 mph figure.

The fastest speed that anyone has ever reached on a mountain bike in more typical conditions, using a standard bike on single-track dirt, is 104 miles per hour. Max Stockl, an Austrian rider, achieved this speed in the rocky Atacama Desert in Chile, zipping down the side of a mountain called Cerro el Flaco. He achieved this in 2007, and the record still stands.

How Can Professional Riders Go So Fast? 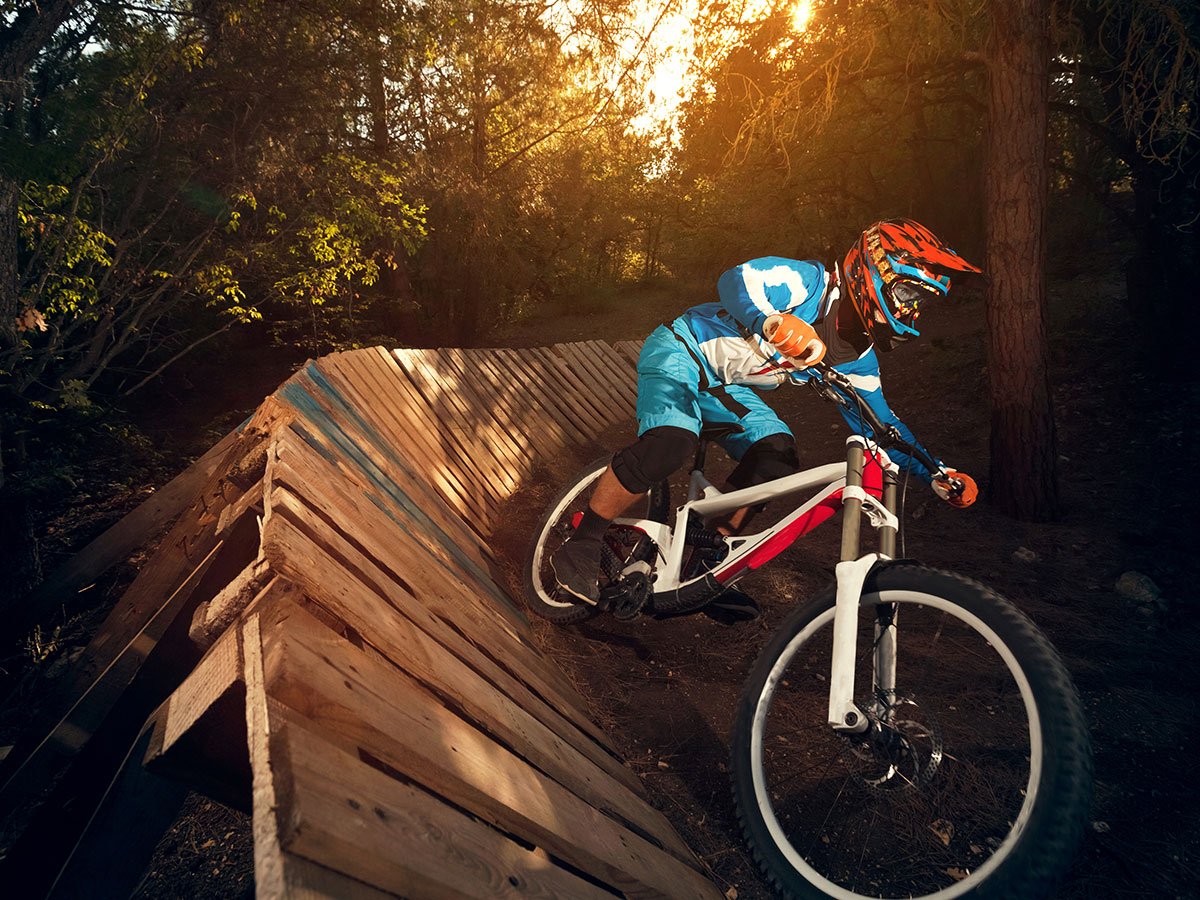 Riders that can perform feats like these have to be extremely aware of how their body weight is distributed, where they are making contact with the bike, and what’s in front of them on the track.

To stay on top of the bike rather than on the ground underneath it, it’s vital to keep your weight balanced mostly on the pedals and the saddle, without tilting your weight too far away from the handlebars—floating your torso over the saddle is a notoriously unstable way to ride.

This way, you’ve formed a strong center of weight in the lower middle of the bike that can’t be knocked over too easily.

Another couple of tips that will help you rip down hills like the pros is to keep your elbows bent and grip the handlebars loosely. This gives you room to slide your weight back onto the pedals and saddle, and a looser grip will make you less likely to lean into what your arms are holding, which is exactly the wrong idea.

Here’s a piece of advice that sounds fishy but is actually dead on: the bike follows your eyes. It may sound like a half-truth, but I’ve experienced it myself: I set my bike going in a direction without intentionally moving it at all, moved my vision to the side, and my whole body, and the bike, moved along with it.

This means something very important: never stare at obstacles, or you’ll bang right into them! 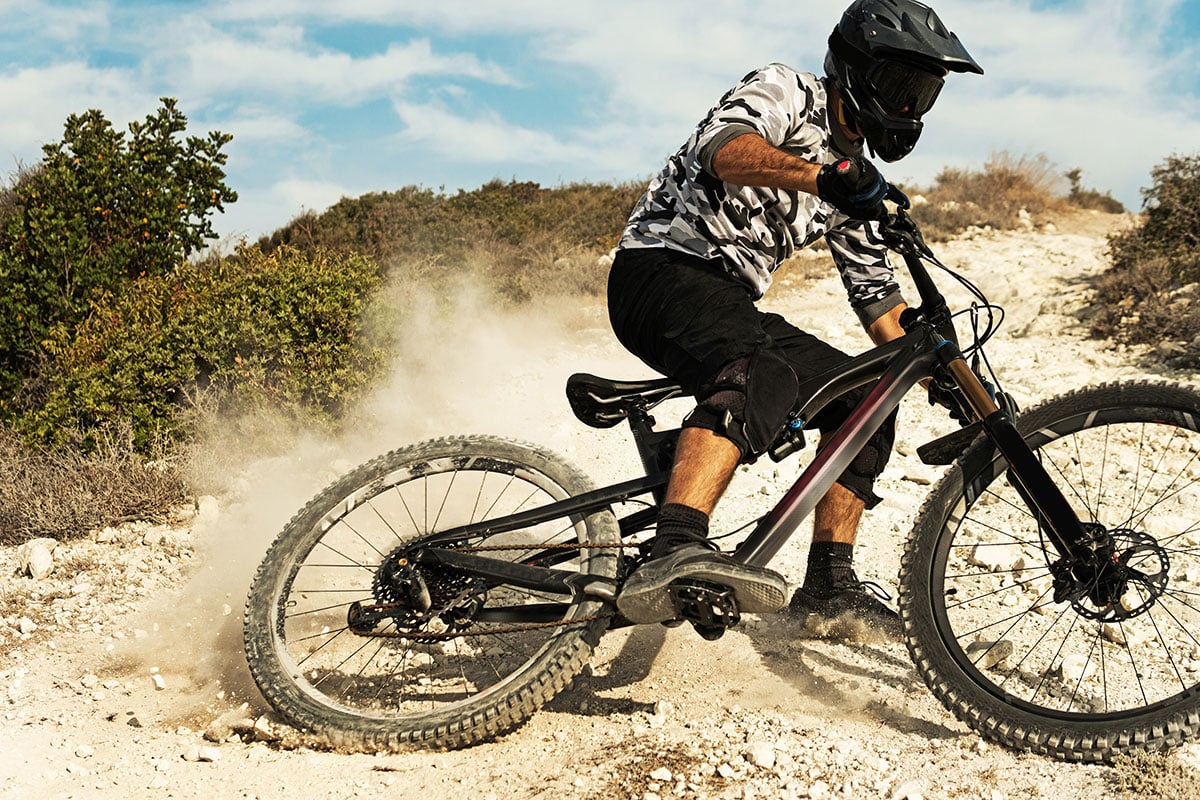 If you’re worried that going fast downhill will put so much stress on the bike that it starts to fall apart, fear not—speed alone doesn’t really pose a risk to a bike’s integrity, and a well-constructed bike will have parts that are securely in place. Screws, washers, and spokes won’t just start flying off like they would in a Looney Toons go-cart chase!

However, all of that constant grinding against rocks and dirt that happens when you mountain bike downhill only does more damage to the tires and puts more stress on the suspension fork over time the faster you go. Any component that absorbs shocks from the ground consistently is bound to get worn out, and you should be mindful that lots of fast riding will take its toll on these parts, especially the tires.

Probably the most important component on any bike from a safety point of view is the brakes. If you’re barreling down a hill and they fail, the results will not be pretty. Lots of fast riding will also put additional stress on the brakes, since the faster the bike is going, the more energy the brakes have to absorb to slow you down. 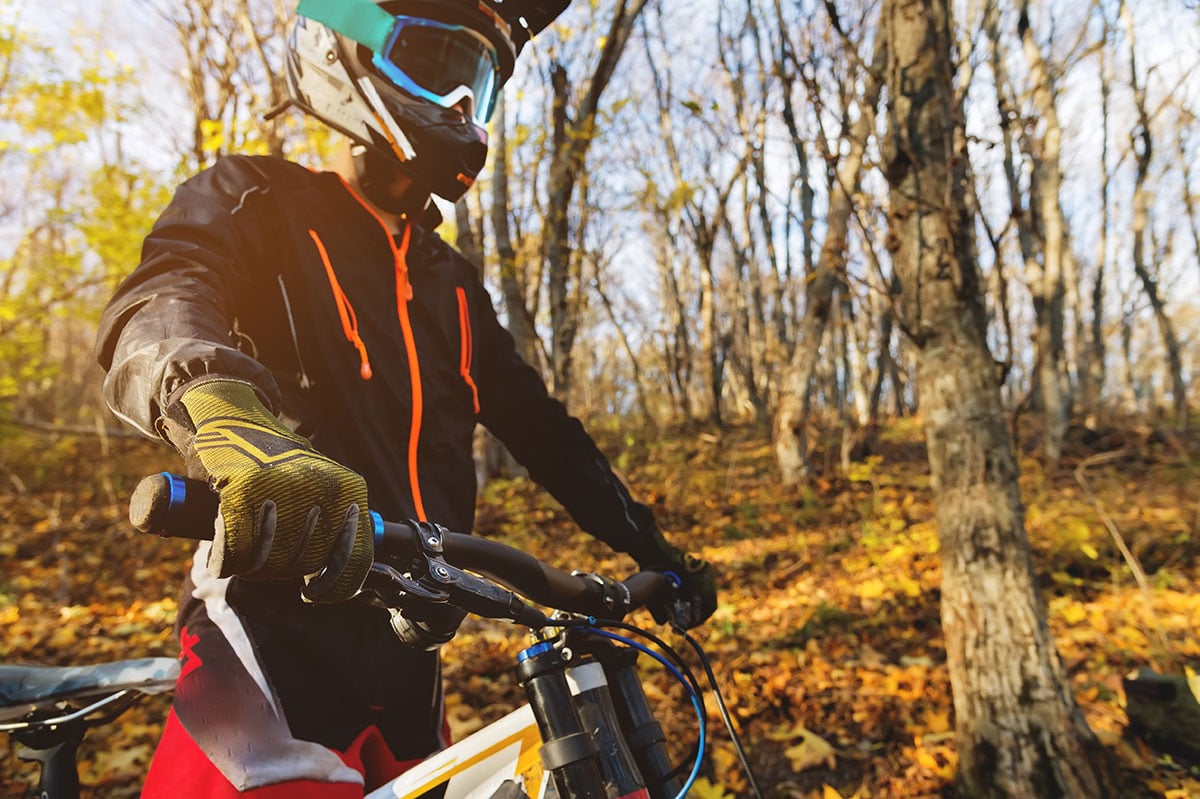 Professional downhill mountain bikers are some of the most talented daredevils in the world, and they are able to deal with obstacles and make quick turns at a speed that’s hard to comprehend. They can maintain speeds on rough single track courses—sometimes 30 miles per hour—that take the average cyclist plenty of training to maintain on an open fire road.

If you want to emulate these boundary-pushing bikers, the best course of action is to take on downhill tracks that you know that you can handle, and work from there. You can even take lessons or at least get in touch with an experienced downhill rider before you attempt the tougher courses —don’t bite off more than you can chew, or you’ll end up with a mouthful of dirt.