Suspensions are important in cycling this is to absorb impact from bumps. This article discusses how mountain bike fork works and their importance in biking. 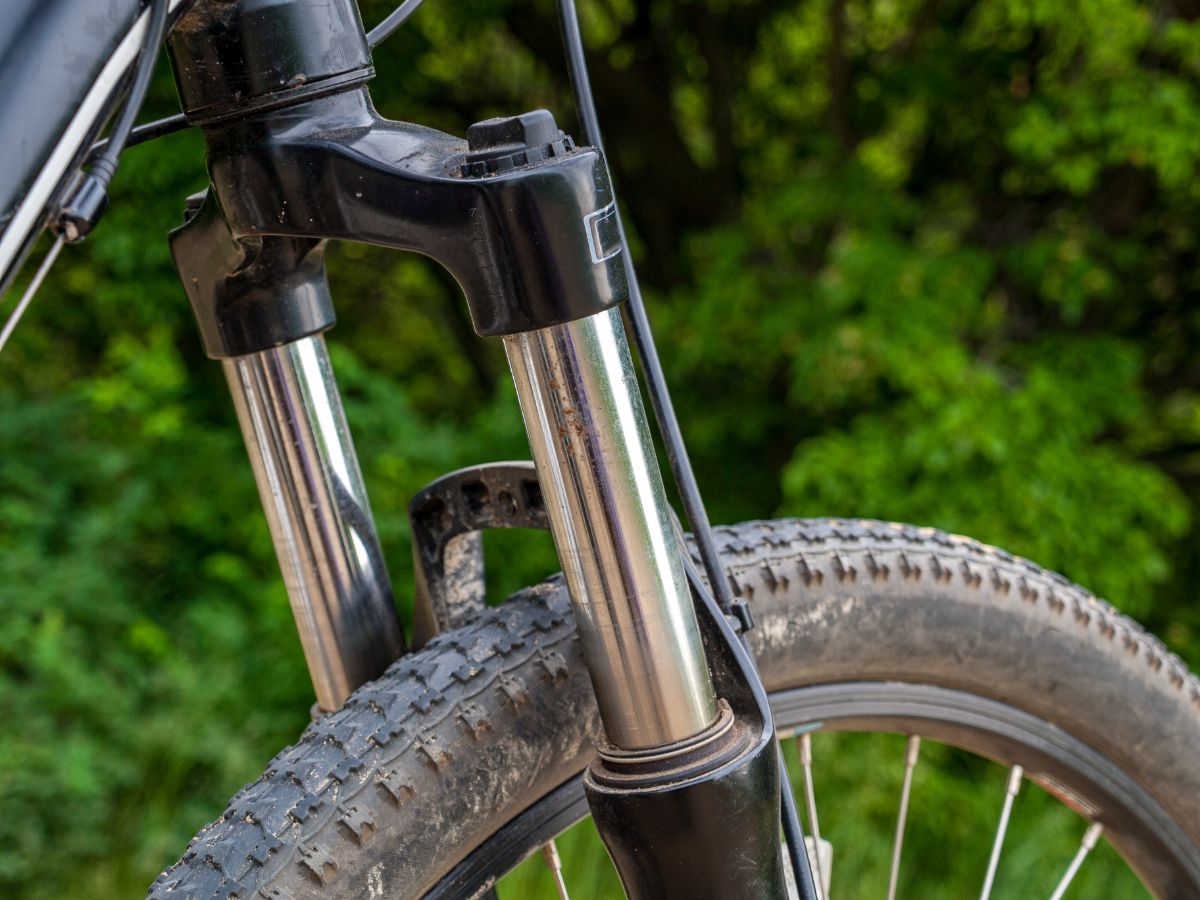 Mountain bike forks essentially provide front suspension to absorb the impact of bumpy roads or big jumps while helping you stay in control and be more comfortable. A lot of riders seem to think bike forks look cool, and I see people riding wide-tired bikes with giant forks on the front along the paved bike trail by my house.

Meanwhile, I zoom past them on my speedier road bike. That’s because mountain bikes aren’t meant for speed, but for navigating tough trails and drops. Read on to find out exactly how bike forks work.

How Do Bike Forks Create Suspension in a Mountain Bike?

Bike forks provide suspension for a mountain bike through a shock absorber, which is made up of a spring and a damper. 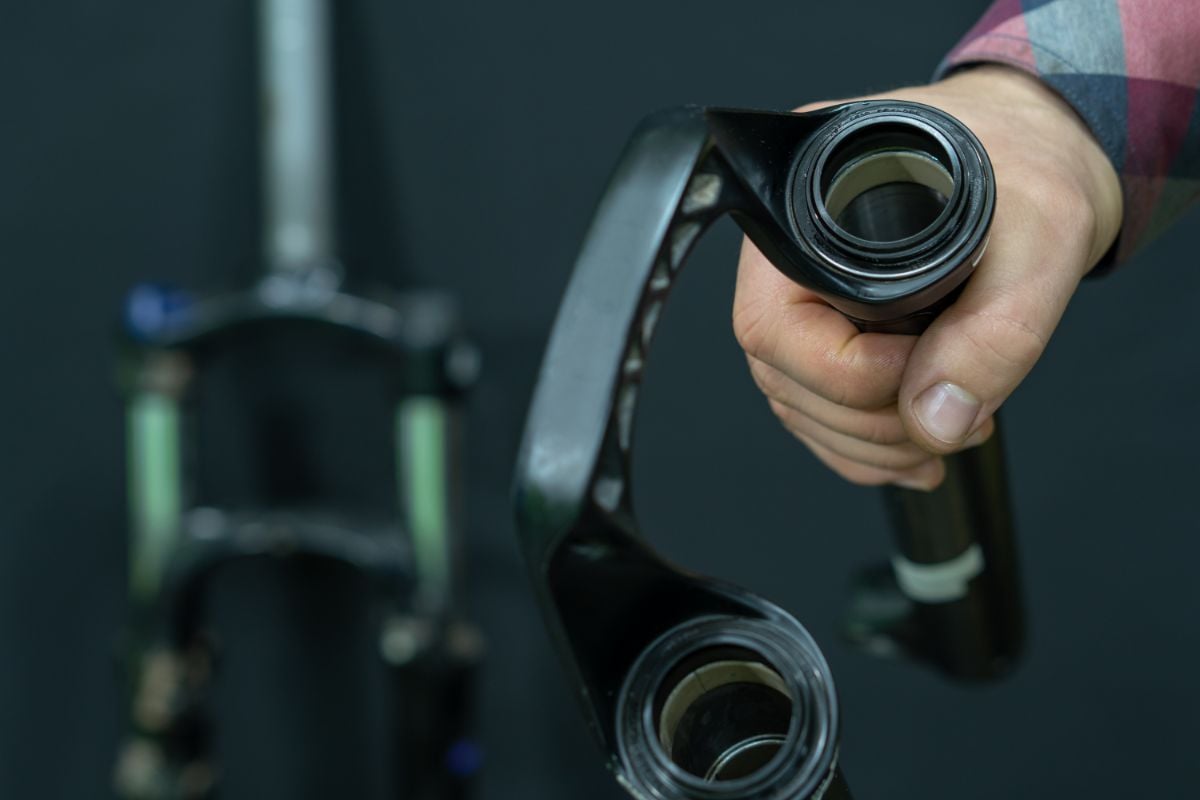 A spring provides resistance for a bike, allowing the suspension to move up on a bump and then quickly back down again. It does this through either a coil or an air spring. A coil is basically a large, heavy version of the spring in your clicky pen.

Made up of steel or even titanium, coils add up to a pound of additional weight to the bike and are less adjustable than an air spring. But, they handle better on more heavy-duty downhill mountain bikes and provide a smoother, more consistent, and more sensitive ride.

An air spring is lighter and more versatile than a coil, though it is often also more expensive. With a shock pump, you can change the resistance on your air-pressurized spring. This kind of suspension moves air through a Schrader valve.

To get the right air pressure, you’ll want to measure your sag. Sag is how much your weight on the bike compresses the suspension. Anywhere from fifteen to thirty percent sag is ideal, depending on the kind of mountain bike you have. 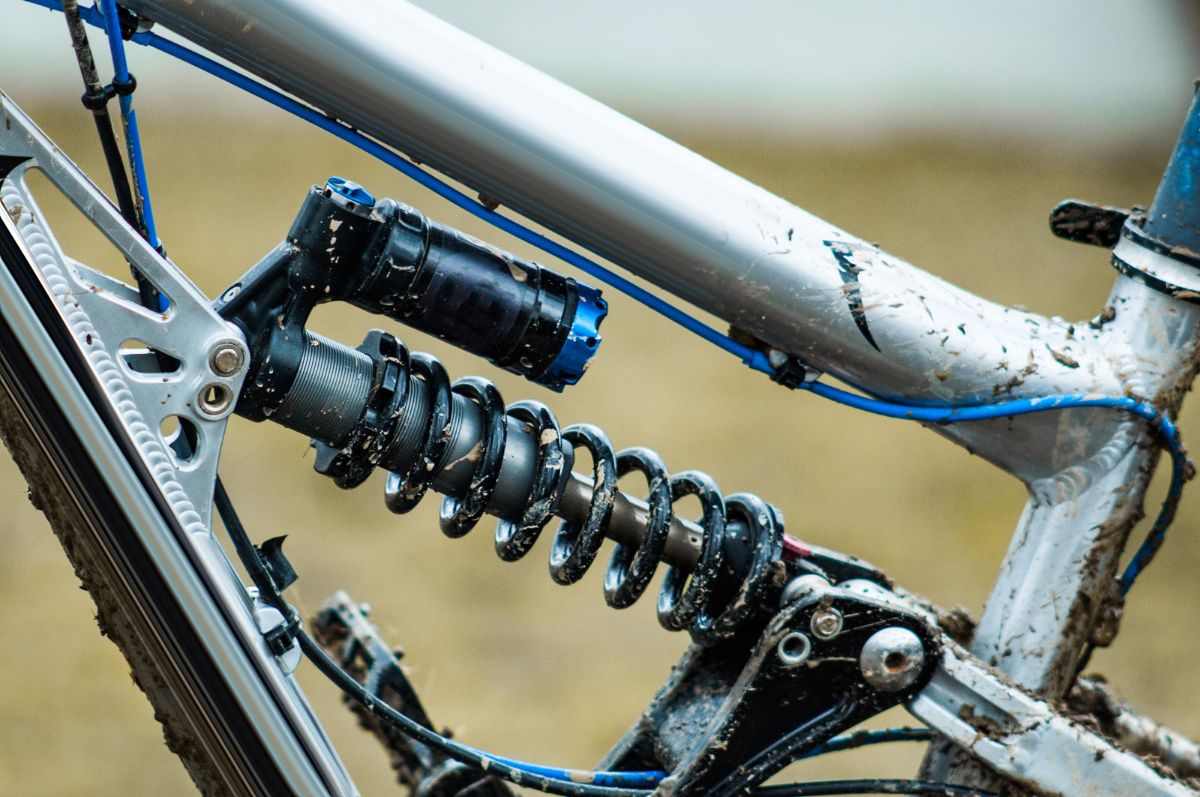 If a bike fork only had a spring, it would essentially be a glorified, expensive pogo stick. That’s why it also has a damper to control the resistance of the spring. The damper takes all the energy of a bouncing spring and dissipates it.

Often, this will happen through a similar oil-filled piston to the one you would have in a car. The piston forces oil through an orifice to release energy when compressed.

High-speed damping is for big landings and bumps and keeps your bike from bottoming out, or hitting full compression too hard. It is often either preset on your bike, or won’t be included on a mountain bike at all.

Mountain bikes can also have rebound damping—which controls how fast and frequently a suspension decompresses—and position sensitive damping. The latter allows the bike to decompress slower so you don’t fly over your handlebars after a big landing. 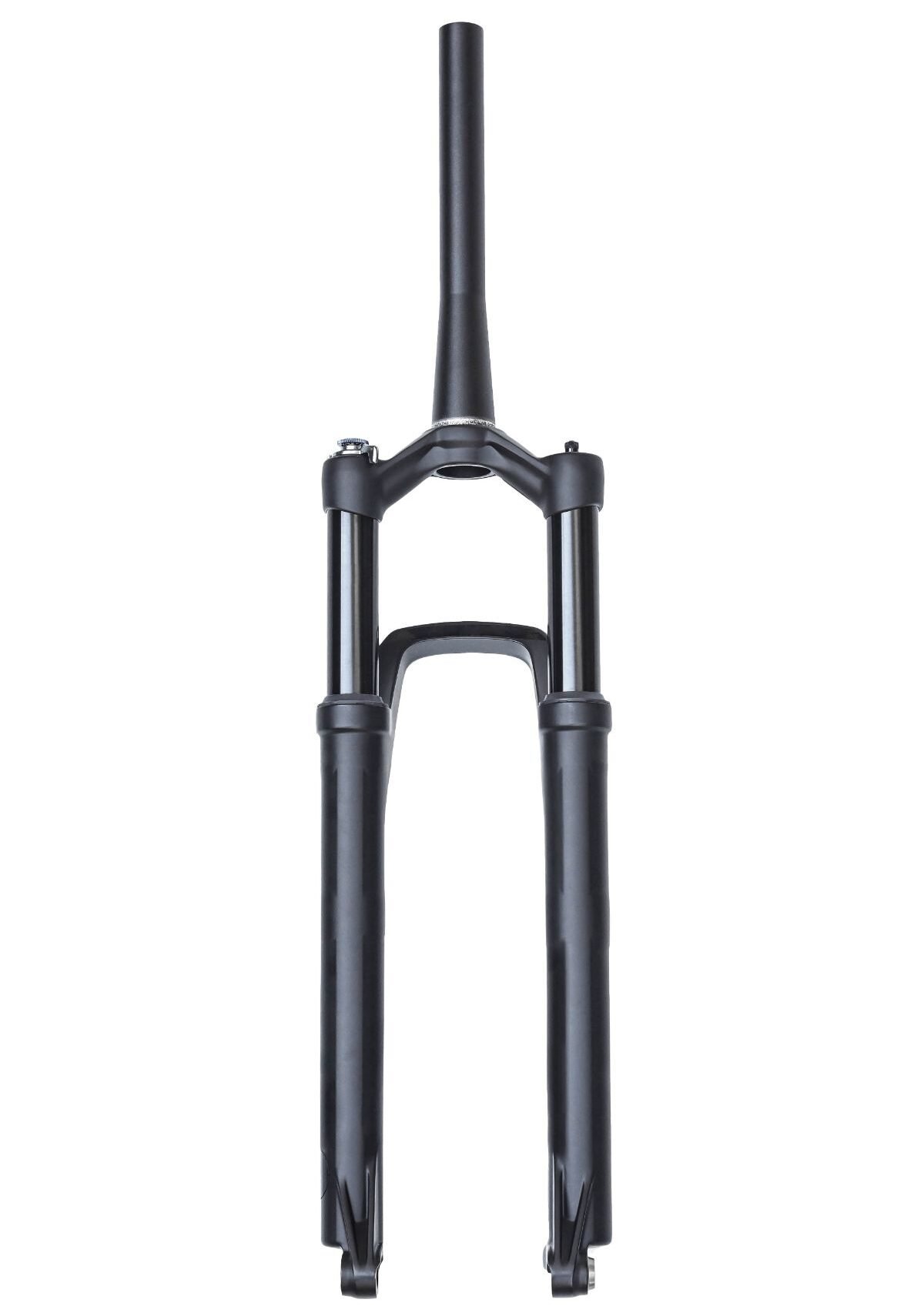 A bike fork has two stanchions or inner tubes that slide in and out of the outer tubes, also known as the fork lowers. The stanchions are brought together with a lower arch or a brace. The fork is connected to both the front wheel and the frame of the bike. In most forks, the spring resides in the left stanchion and the damper in the right.

See also  Are Electric Bikes Worth It? My Thoughts After Owning an E-bike for 2 Years

The stiffness of your suspension will be affected by the diameter of your fork’s stanchion tubes. According to rei.com, “A narrow tube will flex more under the same force than a wider tube. Wider tubes will be heavier and stiffer to absorb greater impacts generated from high speeds on rough terrain and jump landings.”

Many forks also have a suspension lockout, which allows you to turn the suspension on or off. Turning it off can conserve energy while riding on smooth or paved roads. Higher-end bikes will even have the lockout feature on the handlebars for easy access.

How Does Rear Suspension Work on a Mountain Bike?

If a mountain bike has only a front suspension fork, it’s known as a hardtail. Many mountain bikes also have rear suspension and are referred to as dual-suspension bikes. Back suspensions help absorb even more impact from big jumps and obstacles. According to rei.com, a rear shock also, “keeps tires in contact with the ground, increases rider control, and decreases rider fatigue.”

Rear suspensions are located underneath where you sit on your bike, between the two triangles of the bike frame. Like a fork, a rear suspension also has sliding tubes that compress and have either air or coil springs.

How Should I Take Care of My Mountain Bike Suspension System? 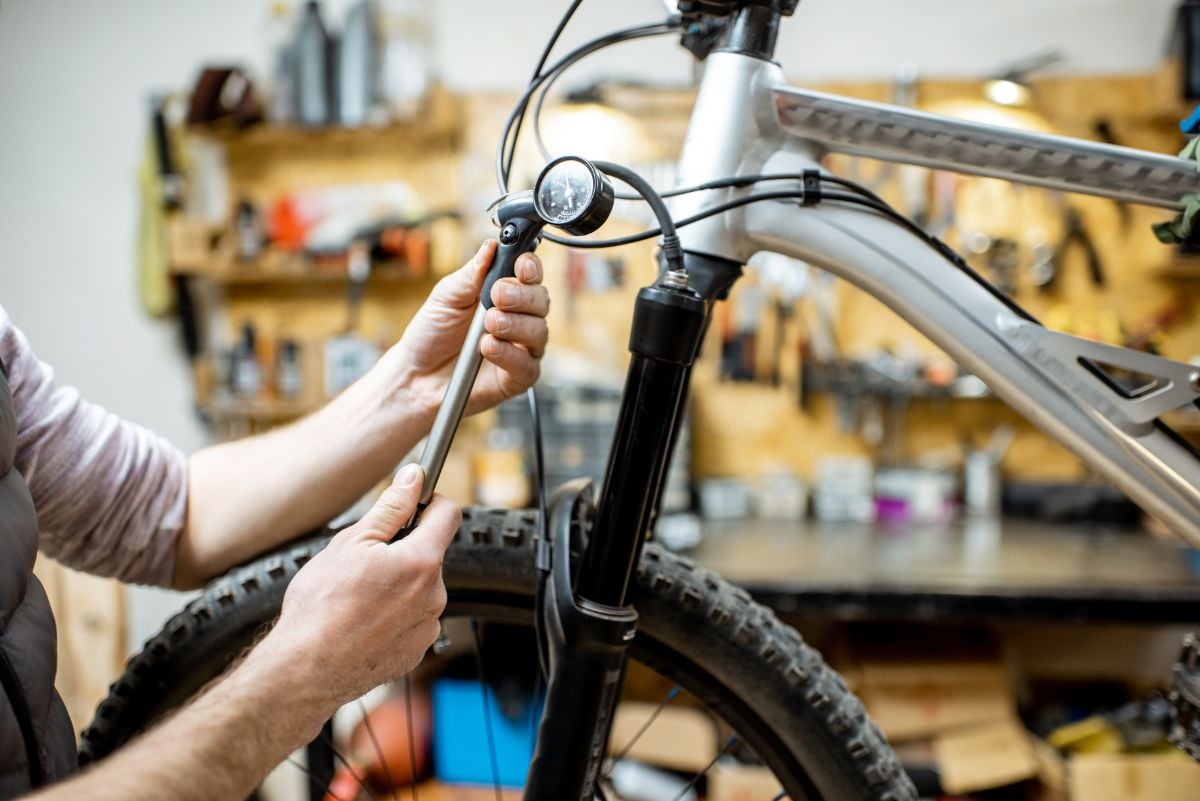 If you want to increase the longevity of your mountain bike, it’s a good idea to both frequently perform maintenance on it yourself and take it to professionals annually or after riding it for a hundred hours. You’ll want to avoid getting scratches on your stanchions, as this can tear up the seals and wear the fork down over time.

See also  Can You Charge an Electric Bike with a Solar Panel? If So, How?

It’s also best to clean the stanchions after every ride. Cheaper suspension systems will wear out faster, so if you intend to push your bike hard, you’ll want to spend more. With these tips in mind, not only will your bike last longer, but it will ride better and you can enjoy your trails and jumps that much more.